Entries are now being accepted for the 2019 Ontario Sheep photo contest. Contest is open to everyone. You do not have to be a member of Ontario Sheep Farmers to be eligilbe to enter. Deadline for entries is Sept 13, 2019.

If you've got an eye for capturing great moments in a photo this contest is for you.

They are looking for photos of your flocks, activities around your sheep farm and you, the Ontario sheep farmer. 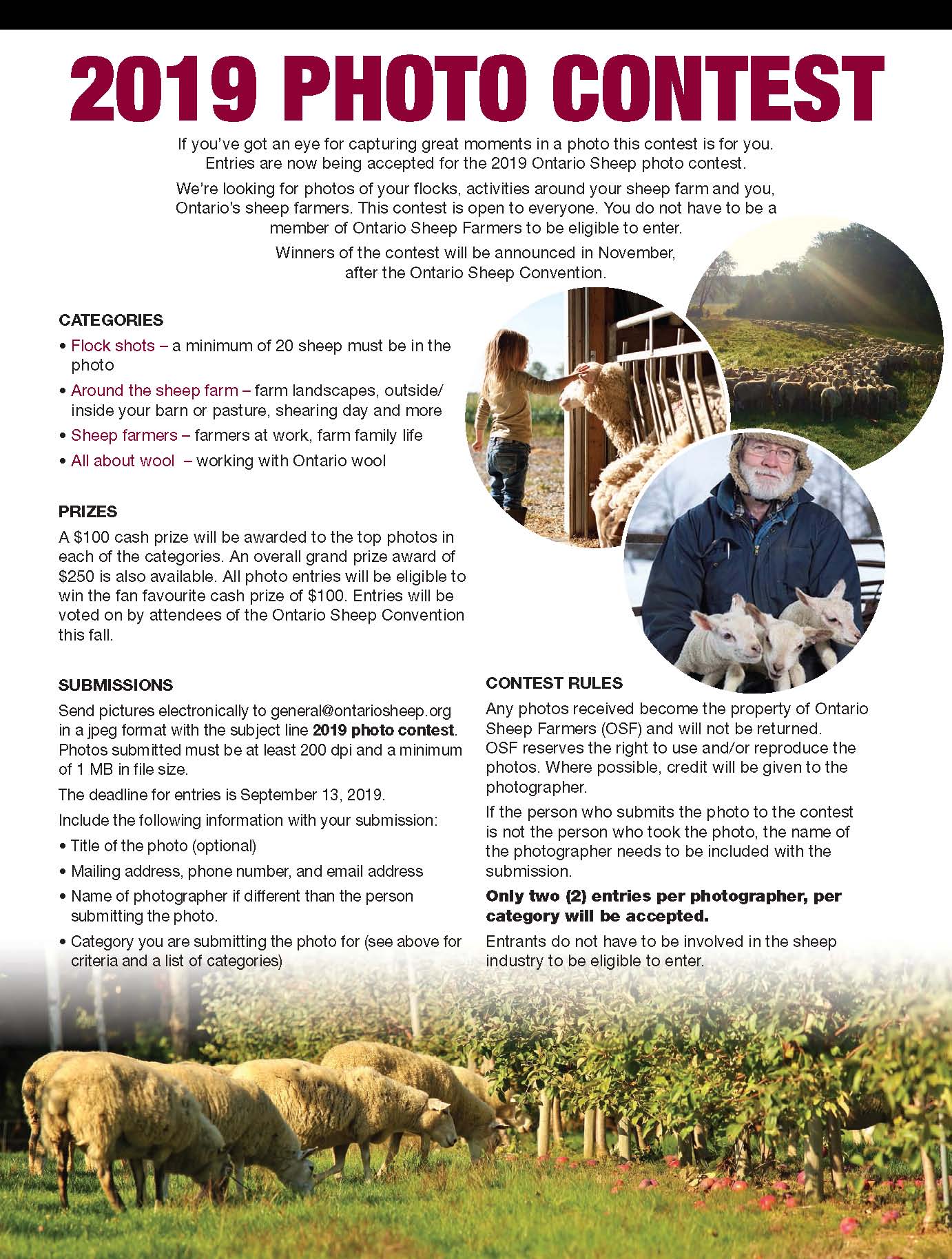 The Canadian Sheep Federation (CSF) is pleased to announce the election of Allan Ribbink as Chairman of the Board at the 2018 Annual General Meeting.

Allan Ribbink, along with his wife Marlene and their son Cody operate a sheep and cash crop farm in Tiverton, Ontario. Their daughter Cailey works off the farm. The Ribbink’s have been involved in Canada’s sheep industry since 1979. “I look forward to working with the CSF Board and staff implementing the organization’s new strategic plan, focused on unifying the industry and helping improve results for the entire value chain” said Mr. Ribbink following the adjournment of the CSF’s 2018 Annual General Meeting.

The CSF Executive Committee has a number of newly elected members this year including Morgan Moore (MB) as Vice-Chair, Liezel Kennedy (SK) as Secretary and Sheri Schweb (BC) as Treasurer. The rest of the CSF Board of Directors consists of Jocelyn McGraw (NB), Joseph Leck (NS), Harry Elsinga (PEI), Wilson Reid (NL), Brian Greaves (CCWG) and Ted Skinner (CSBA).
The 2018 AGM took place in Calgary, following two days of Sheep Value Chain Round Table meetings. The Board also spent some time this year modernizing the organization’s strategic plan.

The Canadian Sheep Federation is a national, non-profit organization with a mission to represent the interests of the Canadian sheep industry, providing leadership aimed at furthering the sustainability, growth and prosperity of the sector.

For more information contact the Canadian Sheep Federation at 1-888-684-7739 or info@cansheep.ca.

Sheep Producers Association of Nova Scotia are conducting a Wool Handling & Evaluation Course to all who are interested! 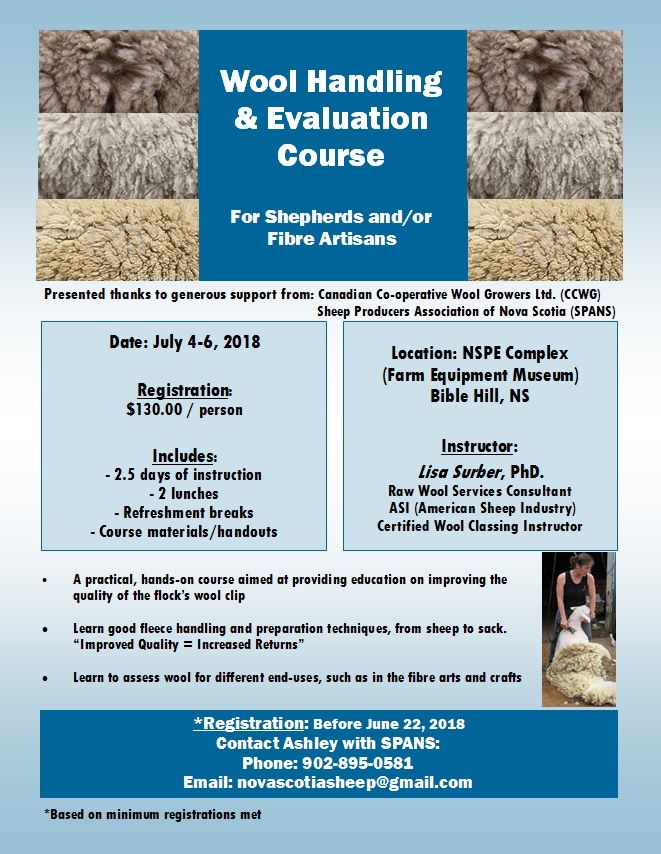 A practical, hands-on course aimed at providing education on improving the qulaity of the flock's wool clip.
Learn good fleece handling & preparation techniques, from the sheep to the sack.
"Improved Quality = Increased Returns"
Learn to assess wool for different end-users, such as in the fibre arts and crafts.

What to expect from future traceability regulations

What to expect from future traceability regulations

The Canadian Sheep Federation (CSF) has engaged with the CFIA through two rounds of national consultations in 2013 and 2015 on proposed amendments to the Health of Animals Regulations dealing with livestock identification and traceability. Through the Regulatory Implementation Committee, national industry associations including the CSF, provinces and the federal government are preparing the implementation of the proposed regulations in order to ensure compliance with the new proposed requirements and message consistency.  What follows provides insight into what's to be expected from amended traceability regulations.  Proposed regulations are expected to be published in Part I of the Canada Gazette in the spring or fall 2018, providing greater detail about specific requirements.  There will be a 75 day comment period following publication in Part I of Canada Gazette, and the CSF will continue to advocate for the interests of Canadian sheep farmers and ranchers as regulations are finalized.

1. The objective of the livestock traceability system is to provide timely, accurate and relevant information to reduce the impacts of a disease outbreak, food safety issue or natural disasters originating from and /or affecting livestock.

2. Four gaps that have been identified in the current livestock identification and traceability
program, include;

4. The objective of the proposed regulatory amendments is to address the gaps previously identified during consultations in 2013 and 2015.
5. An industry-government Regulatory Implementation Committee has been formed with the objective to collaboratively identify and prioritize actions to help prepare for a smooth implementation of proposed amendments to the Health of Animals Regulations.
Proposed Requirements: Animal Identification
6. The proposed regulatory amendments include identification requirements for goat, farmed deer, and elk thereby broadening the scope of activities and animals that are subject to traceability requirements. Identification requirements for bison, cattle, sheep and pigs are already covered under the Health of Animals Regulations.