During the 2016/17 wool marketing season there has been a very significant contrast comparing the fine and coarse wool markets. Fine wool has experienced solid global demand and record prices have been achieved for many wool types 22 micron and finer.  A number of factors can be attributed to this success including the positive international branding of Merino wool.  As well, new and innovative wool products such as double faced and fake fur fabrics being manufactured in China have created new consumers for wool and these products require significant quantities of fine wool to produce.
The specifications for Chinese government uniforms including military, railway and postal etc have recently been changed to favour more fine wool content and huge quantities of wool are required for these contracts.  In China mills are currently focused on increasing productivity and product quality, they have also made significant capital investment in order to comply with new stringent government environmental regulations.

The broader crossbred wool market has struggled the past 18...

Here’s your chance to recognize someone with the title of the 2018 Ontario Outstanding Young Farmer. The OYF program is designed to recognize farmers that exemplify excellence in their profession and promote the tremendous contribution of agriculture to Ontario’s economy. We are seeking nominations of farmers who contribute to their community, who seek new opportunities and who generally are assets to Ontario’s agri-food industry.

Anyone can nominate a young farmer/farm couple/farm partnership for the award.

The OYF program begins each year with the nomination of farmers at the local level. This award will be presented at the Regional Event to be held next September, in conjunction with Canada’s Outdoor Farm Show in Woodstock.

Nominees must meet the following criteria:

More information about OYF & nomination forms can be found at 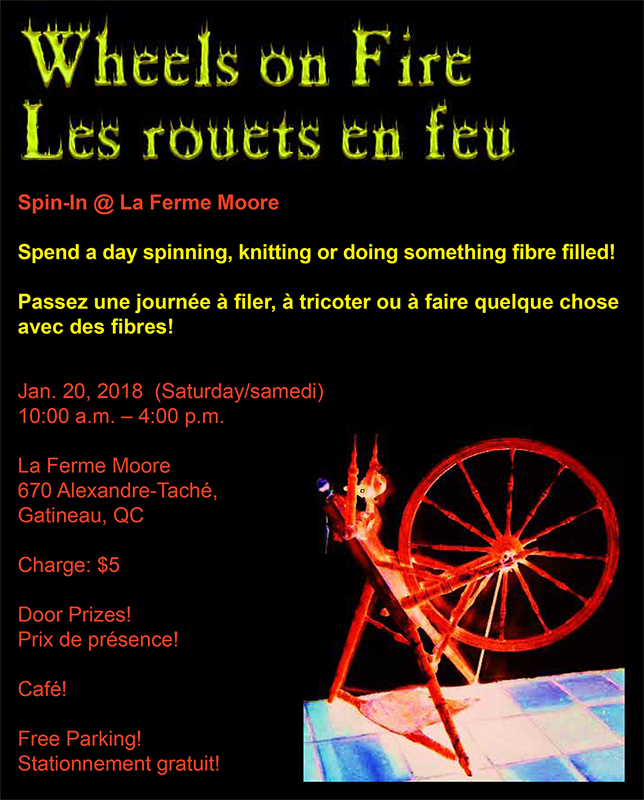 Please join us at la Ferme Moore in Gatineau, Quebec (Hull sector) for a day of spinning or any other fibre-filled activity.

The date is Saturday, January 20, 2018  from 10:00 a.m. – 4:00 p.m.
The entry fee is only $5 per person and there will be door prizes and local vendors.
Food and beverages are available at the farm’s café or at nearby restaurants.
There is an elevator for people with mobility issues.  Parking is free.
La Ferme Moore is easily to get to from Ottawa!
MAP LINK : https://goo.gl/maps/Pa4GYSp2Asv
We’ll be sending more information about this event, in mid-December. Hope to see you at the spin-in!

...
Leave a Comment | Read More
Posted in Shows and Sales

Ottawa, ON (November 23, 2017) – Earlier today, the Canadian Food Inspection Agency officially revoked the Ketchum Kurl-Lock #3 tag (OVI-07-01) with published updates to the list of animal indicators approved under the Livestock Identification and Traceability (TRACE) program.  In a news release issued September 15th, the Canadian Sheep Federation notified Canadian sheep farmers and ranchers that the pink metal Ketchum Kurl-Lock #3 tag was poised to be revoked from the Canadian Sheep Identification Program (CSIP), in preparation for today’s announcement.

Now that the Ketchum Kurl-Lock tag is officially revoked, producers are reminded that an animal may not be shipped from it’s current location bearing only the pink Ketchum tag.  A new, currently approved, CSIP tag will need to be added to animals leaving their current premises even if they have a pink Ketchum tag in their ear.  You will also need to report the new tag number to Canadian Cattle Identification Agency (CCIA) along with the number of the...

Lamb meat and mutton are increasingly popular food choices among Canadians, creating better business opportunities for sheep producers and the agricultural sector as a whole. The Government of Canada provides leading support for science and innovation in order to increase business profitability, enhance industry competitiveness, and foster growth and the creation of good, well-paying jobs.

For the fiscal year ending February 28, 2017 the co-operative recorded gross sales of almost 10.2 million which represents an increase of 2.5% from the previous year.  Net income of almost 1.2 million was achieved which included the gain on the sale of a company owned property in Lethbridge, Alberta.