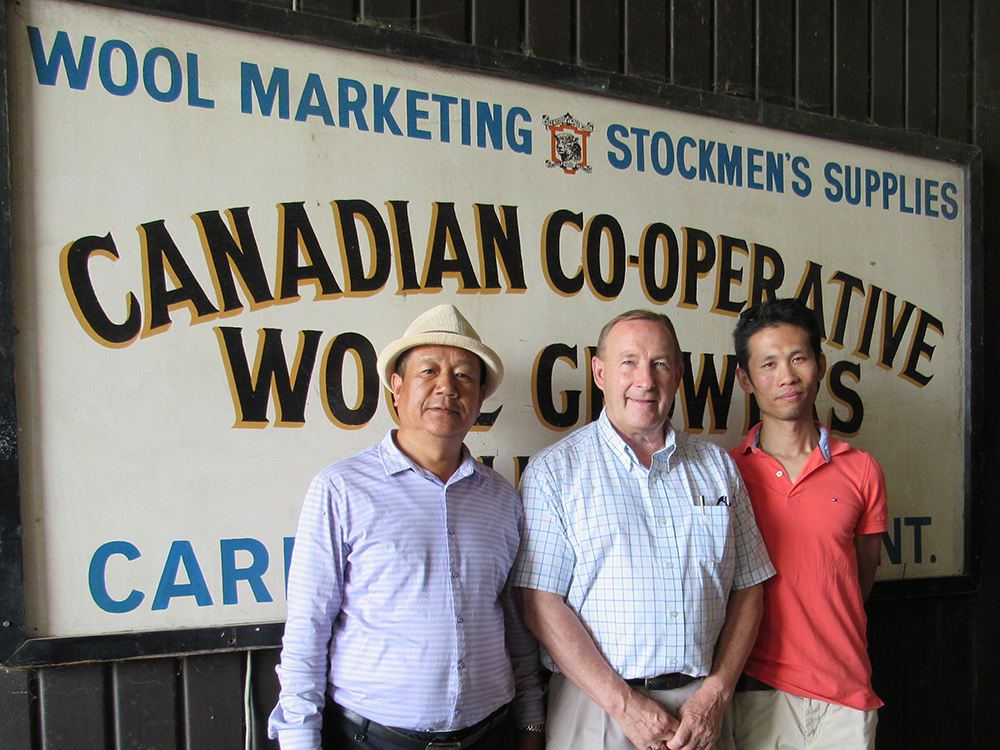 Carleton Place – When Canadian Cooperative Wool Growers General Manager Eric Bjergso is asked how business today compares to what it was 100 years ago, he has no trouble answering. 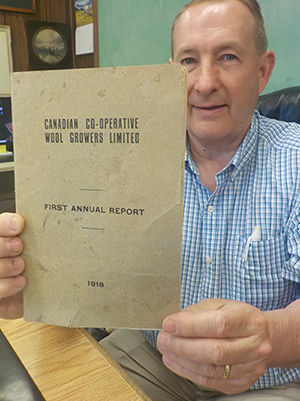 In his office in what was once Canadian Pacific Railway roundhouse and machine shops in Carleton Place, Bjergso quickly comes up with an original, intact copy of the coop’s 1918 annual report which shows it collected 4.5 million pounds of raw wool in that first year. Wool sales stood at $2.9 million, with shepherd’s supplies at a meagre $3,400.

That was the heyday of the Canadian raw wool industry. By the mid-70s when Bjergso came on board, wool collection, grading and processing had dropped to about 1.5 million pounds. In recent years, with changes in consumer tastes and more attractive prices, that number has rebounded to close to three million pounds.

But the really impressive figures are at the retail end. From that early shepherd’s supplies line item, retailing has climbed to $7 million on total annual revenues of just over $10 million.  It’s all about diversification, Bjergso explains.

The CCWG complex is a study in contrasts. In one large section, large sacks of raw wool are stacked in gloomy surroundings which would fit comfort- ably into Dickens England. Other sections contain a wool store and livestock equipment retailing as bright and inviting as any you’re likely to see. In between is a warren of administration offices.

Celebrating its 100th anniversary mostly during its annual meeting and banquet to be held at nearby Almonte Oct. 18-20, the coop was founded as a mechanism for paying all members the same price for their raw product no matter size of the wool clip, the time of year received, or distance travelled to the Carleton Place facility acquired in 1940.

‘’The place was a mess, ‘’ Bjergso observed. ‘’Tracks, turntable, steel wheels… anything and everything needed for train repair could be found in the building.’’ On the positive side, scrap iron was much in demand at the beginning of WWII and what might have been a liability was turned into an asset.
On the CPR mainline, Carleton Place was ideally located to handle wool from the west and ship it via Montreal to points in Europe as well as across Canada. Originally with warehouses in Weston and offices in Toronto, by 1972 the entire CCWG operation had been moved to Carleton Place. Coop administration is housed a section of the building which once served as storage and boiler room for the CPR.

Raw wool is graded according to fibre diameter and length, amount of grease and foreign matter. After grading as fine, medium and coarse, wool is shipped out in compact bales, with 90 per cent exported out of Canada. China is a major buyer.

In 1979, the old CPR coal bins were transformed into the Real Wool Shop. The roundhouse was renovated into Stockman Supply and overflowing Equestrian Centre for tack and Western clothing. The room also contains a railway memorabilia mini museum.

Together with livestock supplies sold in Carleton Place and at outlets in Lethbridge, St. Jacob’s, Cookstown and Saint-Hyacinthe, retailing now makes up about 60 per cent of CCWG annual sales. ‘’With the drop in wool processing in the ‘70s, we knew we had to diversify and we’ve done a pretty good job of it,’’ Bjergso said.
There’s much to celebrate and as part of the festivities, CCWG is developing a 100th banner. In addition, the milestone was recognized at the Lambs Down Park Festival June 16, an annual family day held on the coop grounds, and will be acknowledged again July 7-8 during A Stitch in Time demonstrations and displays at Dunvegan, Glengarry County. 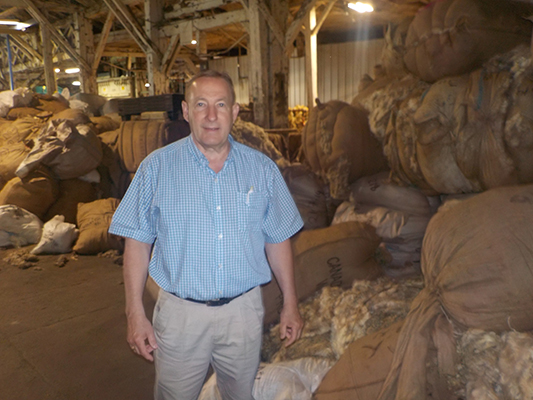 Congratulations on celebrating 100 years of outstanding service and valuable contribution to the Carleton Place Business Community. 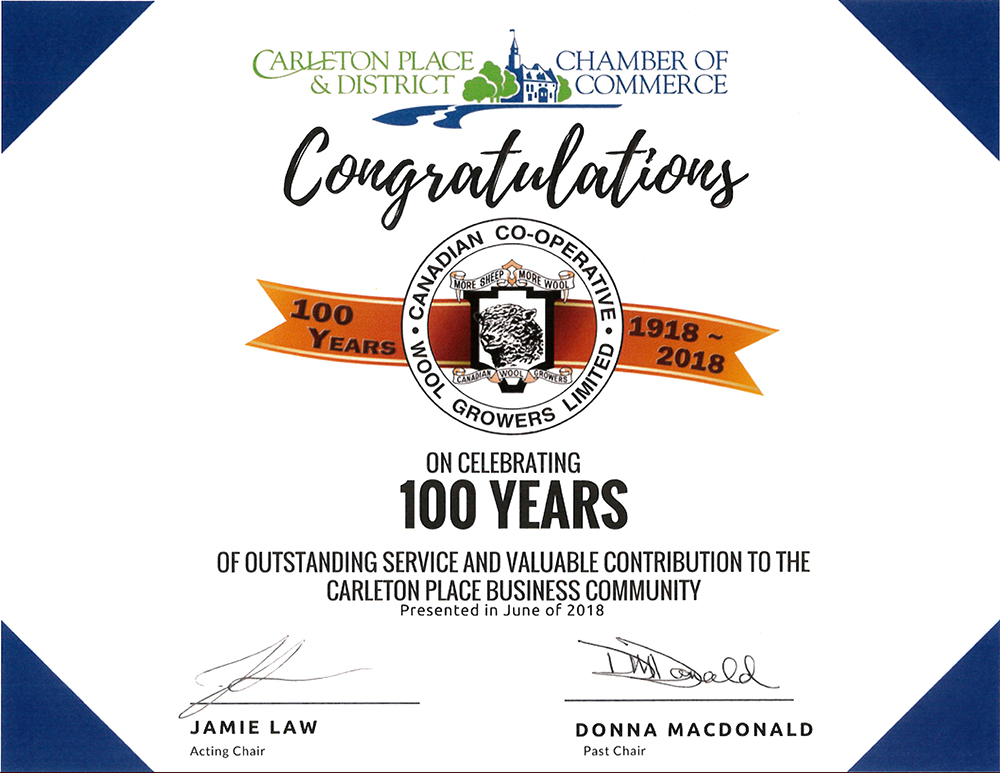 Presented by the Carleton Place & District Chamber of Commerce on July 20, 2018.

This week our chair Jamie Law of Law & Orders and our General Manager Jackie Kavanagh were honoured to present the Canadian Co-operative Wool Growers Limited (CCWG Livestock Supplies & Equestrian Centre and the Real Wool Shop) with a special certificate in appreciation to their 100 years of outstanding service and valuable contribution to the Carleton Place Business Community. 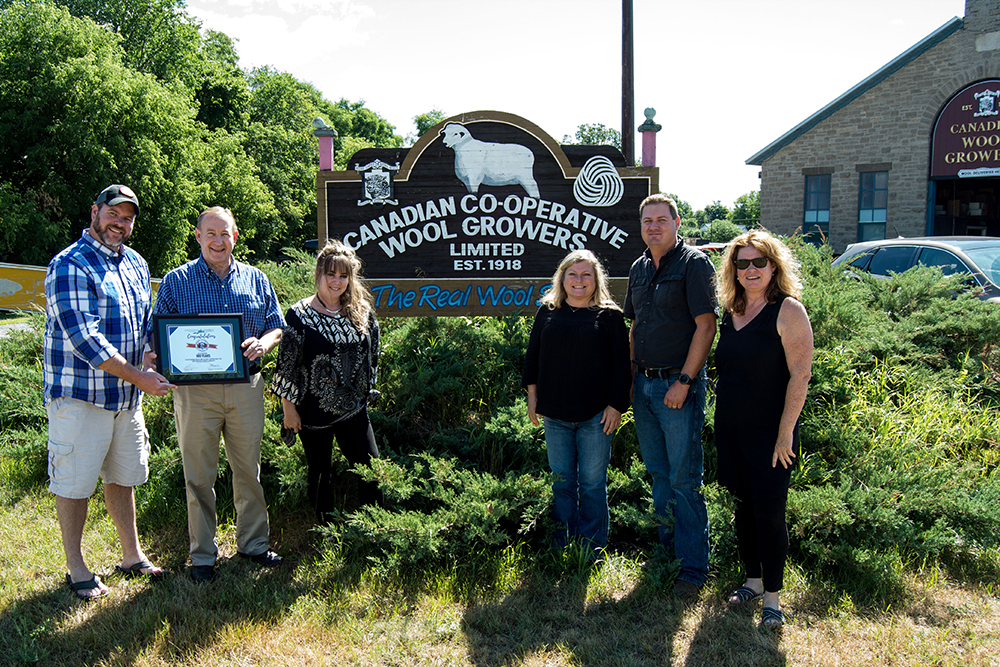 Canada Gold Beef Ltd, owners of the Innisfail Alberta based SunGold Specialty Meats Ltd. (SunGold) and the Canada Gold Lamb Lot near Iron Springs Alberta, wish to announce the merger of their lamb operations with that of Fresh Canada Meats Ltd, the majority shareholder of Manitoba based Canada Sheep and Lamb Farms Ltd. Fresh Canada Meats is a wholly owned Canadian subsidiary of Integrated Foods Ltd, an integrated lamb producer and processor in New Zealand.

Inconsistency has plagued the Canadian sheep industry for as long as it has existed. Growing the lamb product demand in a diverse and growing market such as North America requires a consistent and reliable supply of sufficient scale to allow solid programs to be built with retail and food service partners. NALC is all about bringing together a disciplined, significant and resilient supply chain to benefit such retail and food service customers and ultimately the consumer through recognized branded product lines.

Canada Sheep and Lamb Farms is one of the largest sheep farming operations in North America producing lambs year-round from a breeding flock currently exceeding 35,000 ewes and ewe lambs and soon growing to some 50,000 plus head. This farming system is designed to produce significant numbers of lambs for finishing to market specification at the Canada Gold Lamb Lot.

The Canada Gold Lamb Lot is a state of the art, one of a kind lamb feeding operation in the heart of Southern Alberta cattle feeding country with a licenced one-time capacity of 50,000 lambs. This lamb feeding facility has scope to finish some 200,000 market lambs per year.

SunGold is Canada’s largest federal lamb processing plant. Significant investments have been completed across many areas making it one of the premier lamb processing plants in North America. The plant utilizes many of the latest technologies in processing and value-added production and ships products domestically and around the world to a diverse set of customers.

The merger does not preclude NALC working with both established and new entrant lamb producers as well as other entities who wish to be involved in a unique lamb supply and value chain that is able to provide sustainable opportunities for those capable of disciplined business relationships.

It is an exciting time for NALC and the Canadian sheep industry. The merger is a natural evolution in the maturity of the Canadian lamb industry that has, in the past, suffered from fragmentation and uncertainty. The industry can now aspire to be one that is truly customer driven and achieve sustainable, long term future growth.

What does this mean for producers?
NALC is committed to create a controlled supply and value chain for North America to meet the disciplines of delivery in full, on time and in specification. This business model creates many opportunities for forward thinking producers to both specialise and scale up their lamb operations to create a sustainable future for themselves.

What does this mean for customers and consumers?
NALC is driven by the market need for a Canadian based year-round supply of consistent lamb products. For retail and foodservice customers this means they will be able to work directly with NALC on desired specifications and products including tailored genetics and lamb production programs. For the first time ever, Canadian retailers and foodservice companies will be able to get the volume of Canadian lamb they want, when they need it and at the specifications they require.